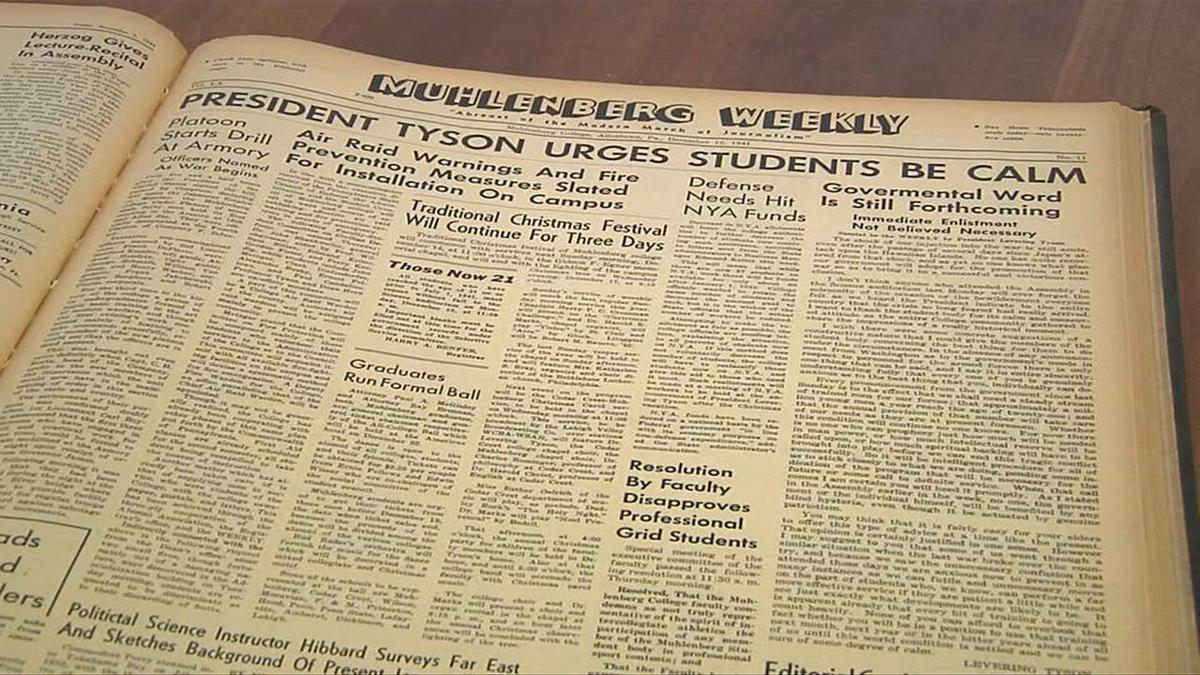 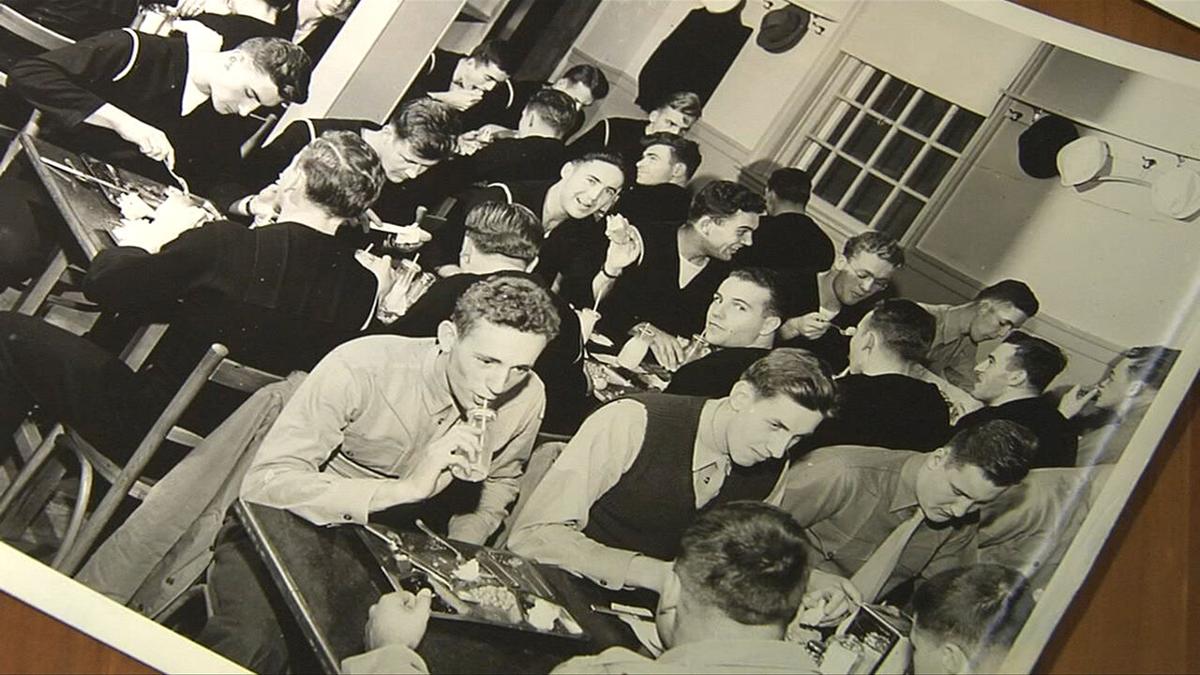 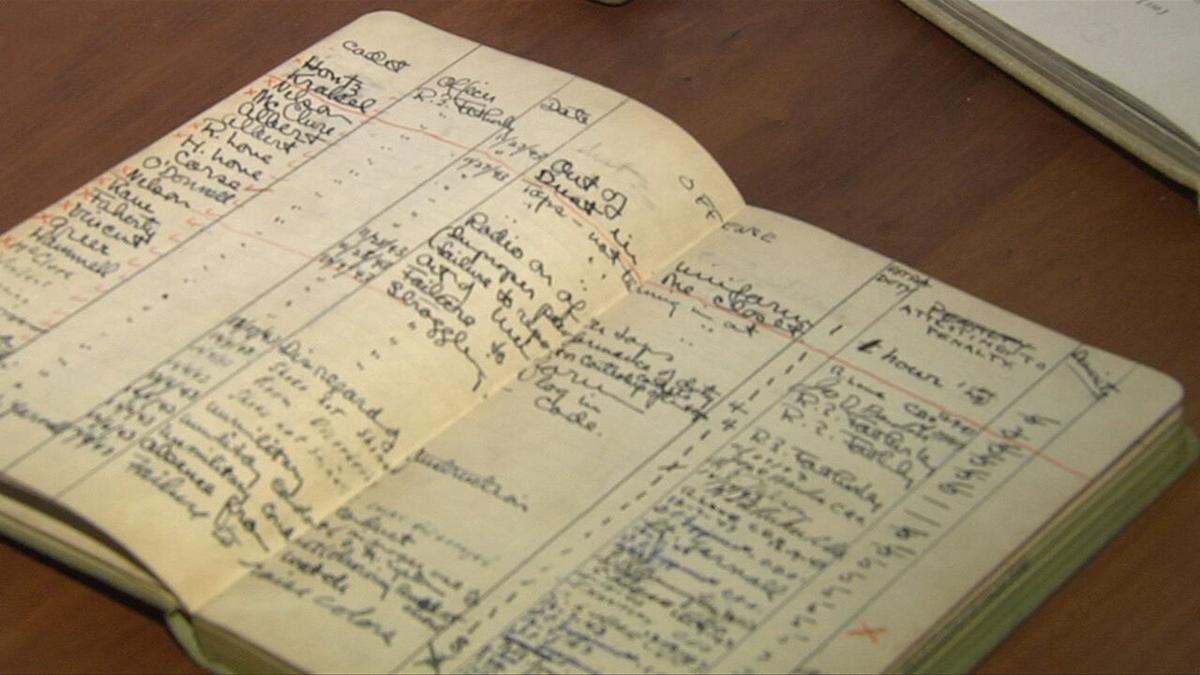 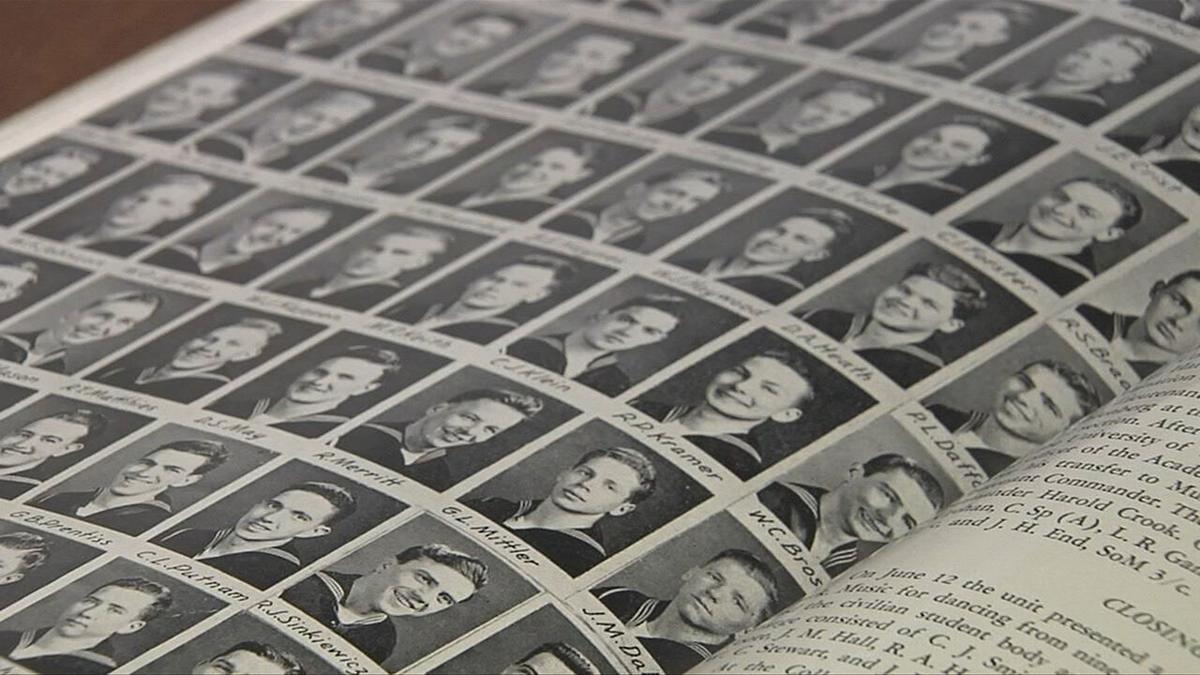 1946 yearbook includes many members of the Navy's V-12 program 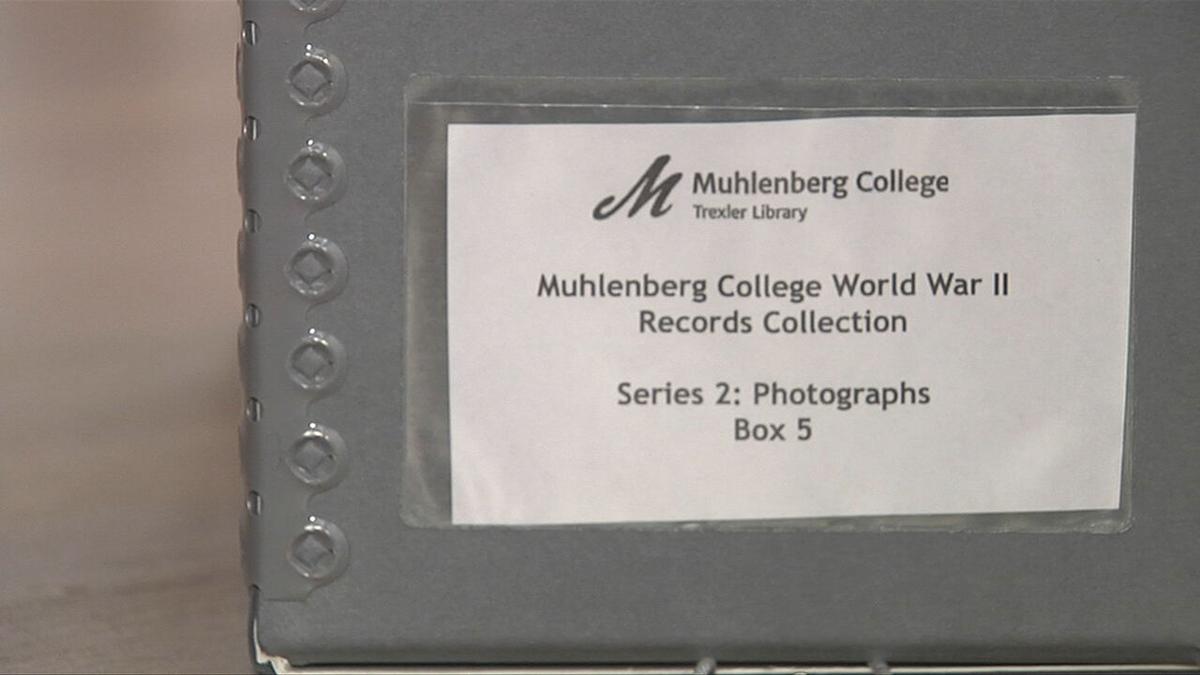 It is nearly midnight on the Muhlenberg College campus. The next day, June 30, 1943, 400 members of the U.S. Navy’s V-12 training program are due to be arriving on campus. And yet there were still last-minute details to be done. This is how college president Levering Tyson later described it in a report to the college board of trustees:

“The official history of the college,” he wrote, “should record that at the conclusion of the final inspection of the plant the commanding officer, the business manager, and the president of the college, personally and physically carried into the refrigerators of the new mess hall a considerable number of crates of eggs which had been delivered by truck after the regular personnel had left at a rather late hour. The individuals concerned with this fact decided then that if the circumstances was an index of the work ahead, they better go home promptly for some much needed rest before the morrow dawned!”

In spite of the tone of mock distress, the fact was that Tyson could not have been more pleased with the final fruition to serve the country’s war effort almost before the smoke from the Japanese attack on Pearl Harbor that had thrust the U.S. into World War II had cleared. In fact, long before the war broke out in Europe in September of 1939, Tyson had an inkling of what Hitler’s dictatorship might bring. In the early 1930s he had been a part of a group of academics and journalists who were involved in a program to study how the relatively new medium of radio, heretofore largely used for entertainment, could also be an instrument to inform and educate students and the general public. One of those working with Tyson was a young journalist name Edward R. Murrow. It was Murrow who later, working with CBS Radio, created a series of broadcasts using knowledgeable journalists that become the concept that later became regular network news. It also helped that Muhlenberg had a link to the White House through Tyson’s wife, who was an acquaintance of Eleanor Roosevelt. The First Lady had spoken at Muhlenberg in 1942 when she addressed the campus body on the war objectives of the nation. Her husband, along with being the commander in chief, had been the assistant secretary of the Navy during World War I. His Oval Office was decorated with ship models that he made. Anything having to do with the Navy had a special interest to FDR.

Like the rest of the nation, Muhlenberg College had been stunned 80 years ago by the Japanese attack on Pearl Harbor. Many of the all-male student body quickly decided to join the military. Others were subject to the draft.

This left Muhlenberg open for the Navy’s V-12 College training program. The process began on February 25, 1943, when Commander Scott G. Lamb and other Navy officers made an inspection of the campus to determine its usefulness. The inspection was completed in one day instead of the usual two. It was the first real indication that the college was selected. The Navy felt it was possible to train up to 525 men at a time. Tyson, however, suggested that the college could do the best job with between 450 and 500. On March 12, 1943 Muhlenberg was notified by telegram that it had been selected to receive 460 prospective officer candidates, 400 of them under the basic curriculum and 60 as pre-medical students. On April 2, 1943 the college was told that it should begin preparations for the arrival of the Navy students on June 30.

Muhlenberg quickly went into action. The student commons eating hall was turned into a much larger mess hall. All the campus dorms were turned into living spaces for the Navy trainees and the fraternity houses were transformed into a dispensary and infirmary. Another factor was the curriculum. Planned as a compromise between the Navy and Muhlenberg, it would include all the traditional courses with the additional Naval Education and Engineering Drawing. Allentown architects added their bit to the war effort by agreeing to teach the drawing courses. The Navy provided its own instructors for the Naval Education courses.

Civilian students left following commencement on June 4, 1943. The pace increased that month as working around the clock the administration with the Navy checked the massive amount of paperwork that included arranging schedules and shuffling room assignments. All this included the building projects that were going on around the clock. At 8 a.m. on July 1, 1943 the Navy raised its National Ensign, the national flag that was flown on a vessel to indicate its nationality, formally establishing Muhlenberg for the training of prospective Navy, Marine Corps and the Coast Guard officers under the Navy V-12 Program.

The Navy announced that the program was a college program and that they were merely contracting for space. By the end of that first day 426 out of 456 students had arrived. By sundown on July 3 every member of the unit had taken their physical exam and been registered. They included 253 sailors, and 200 Marines. Fifteen states were represented in the first training unit. Pennsylvania had the largest with 246, New Jersey was second with 76. New York was recognized with 69, West Virginia had 17, and Maryland had 12. Wisconsin, Indiana, Connecticut, Massachusetts and several other states were represented with smaller numbers.

Civilian students would have found a far different place if they had returned. The grounds were restricted, security watches were set at night, and messenger watches were established during the day. The college’s neighbors found they were awakened by bugle calls at 6 a.m. Rather than sauntering to the mess hall the trainees marched in formation. Neighbors around the college found the whole thing interesting, at least at first.

The program would continue until 1946. And as with anything with this much dislocating, glitches were going to occur. Perhaps the biggest was that some of the trainees were not ready for college. Tyson and the college administration, working very closely with the Navy, did what they could to help those young men who had difficulty with the academic parts of the program. Some who simply could not pass were sent to serve in their respective services.

“Muhlenberg’s V-12 was unique in a number of ways,” writes James G. Schneider in his book, “The Navy V-12 Program: Leadership For A Lifetime.” “It was the only unit to be discontinued (June 30, 1945) and then reactivated (March 1, 1946).” Schneider notes that Muhlenberg’s basketball teams during those years had some “magnificent” players. He adds that the first underwater obstacle course for a V-12 unit was installed in the pool at Allentown’s Jewish Community Center, then located at 6th and Chew Streets. He also credits the “energetic Levering Tyson” for the high quality of speakers from the V-12 that spoke at the commencements.

As each new V-12 unit arrived at the college, Tyson was on hand to greet them with remarks about what he felt was most important, the role they were playing in the fight against the Naziism and Japanese militarism:

“In the piping times of peace, I interpreted the aim of this College to be the provision not of monastic seclusion for a group of intellectual prodigies, nor a well-equipped country club for irresponsible playboys, but rather a congenial environment in which approximately 600 young men can live together in comfortable simplicity as they trained for useful adult occupations. This concept persists. This war is serious business for those who want to win it. On this ship there has been assembled a group who are going to work together to train themselves so that they can help to eliminate that particular brand of tyranny, brutality and paganism our enemies are trying to inflict on people are over the globe. Besides which, when a decisive military victory over the Axis countries is assured, we also want to be a part of the influence which will establish for humanity a perpetual and workable system of free government and liberty. This is a timely, intelligent, and practical aim. I hope you will subscribe to it and adopt it as your own. I am confident that if you will do so you will have a happy, comfortable, and useful voyage on this ship. I can promise you that the Navy and the College will do everything to bring about this result.”

By the latter part of 1946 the Navy V-12 program at Muhlenberg had finally come to an end. Levering Tyson was college president until 1951. Today the records of those times rest in the Muhlenberg College archives.