World Series: Follow updates and scores as the Astros face the Braves

HARRISBURG, Pa. — In a letter sent to Republican state Sen. Jake Corman and House Majority Leader Bryan Cutler, Pennsylvania Gov. Tom Wolf on Wednesday called for the Legislature to return to Harrisburg and pass a law that would require masking up in classrooms and childcare centers across the state.

The governor stated in his letter that parents, pediatricians, teachers, and others have reached out to his administration, primarily parents of students who aren't yet eligible to get the vaccine. He said they are "very concerned about the lack of a mask mandate in their school district."

According to Wolf, the concerns are not due to an organized letter campaign. 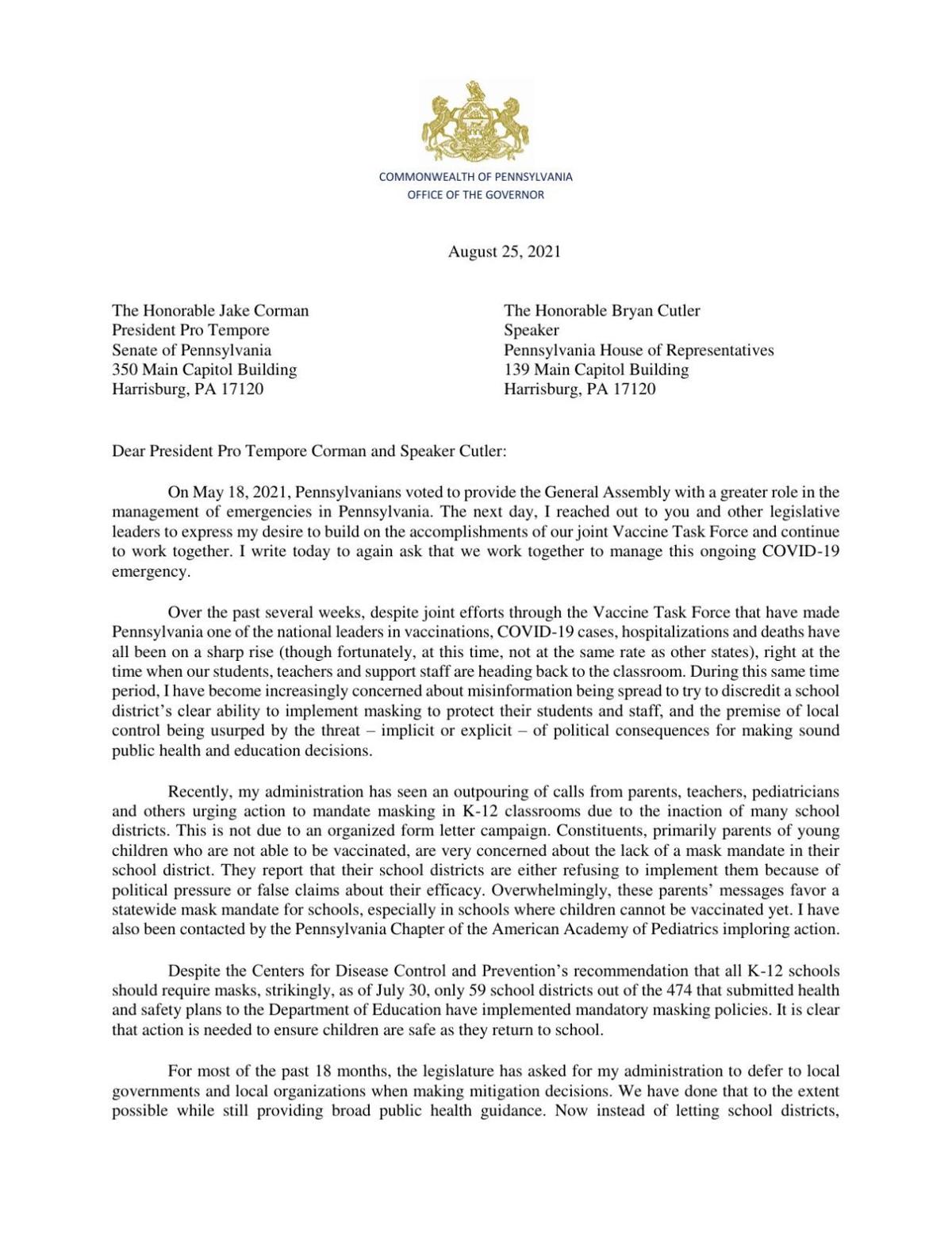 "The science is clear," Wolf said in his letter, "that masks reduce virus transmission and that they, along with our vaccination efforts, give us the best chance to keep our classrooms and child care centers open instead of having them shut down due to COVID infections."

"This is just another example of the inconsistency and basically political cover that the governor has been seeking throughout this pandemic," said Jason Gottesman, a spokesman for the Pennsylvania House Republican Caucus.

Gottesman said the House Republican Caucus is pushing back against any statewide mandate.

"We believe these decisions should be made at the local level based upon input from the local community, all the way down to hearing from parents and students about what they feel as though is best," said Gottesman.

The Pennsylvania State Education Association, which represents about 178,000 active and retired teachers and school employees, also responded to Wolf's letter.

"PSEA has been strongly encouraging school districts to require universal masking in all K-12 school buildings," said Rich Askey, the union's president. "We know that masking up in our schools is essential to keeping kids learning in person in the classroom all year, especially with the surging Delta variant that affects young people more aggressively than the original strain of the virus.

"This is so important that we believe policymakers should explore all possible avenues to ensuring our schools remain safe, including legislative action, if that is the best way to achieve this.

"We call on legislative leaders and the governor to work together to ensure our schools implement masking policies that will keep everyone safe through this school year. And, in the meantime, we continue to urge school district leaders to follow CDC guidance and adopt universal masking policies as students return to school."

Just this week, the Schuylkill Valley and Reading school boards voted in favor of universal masking.

The Reading School Board voted to require masks for all students, teachers and staff in all district buildings until at least Nov. 4.

Mandy Moore: Motherhood has been challenging

Mandy Moore: Motherhood has been challenging