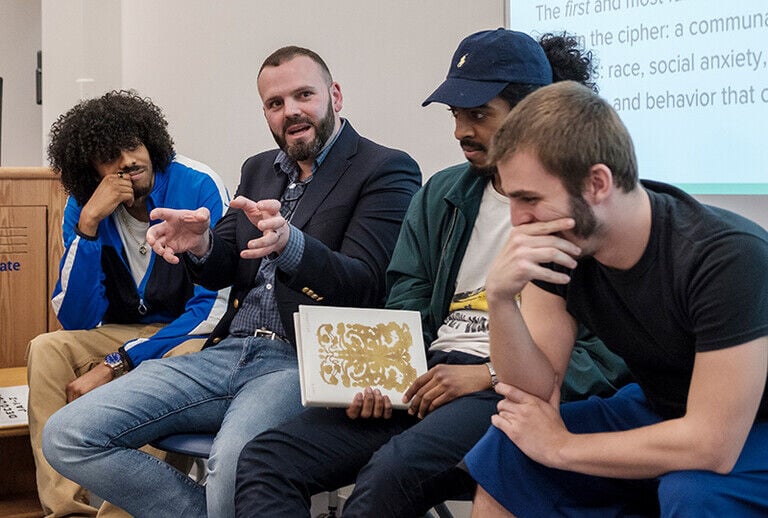 Shott (far right) was a student in the first section of "Critical Approaches to Hip Hop" in 2019. He listens as Professor Justin De Senso (second from left) discusses the origins of the art form. 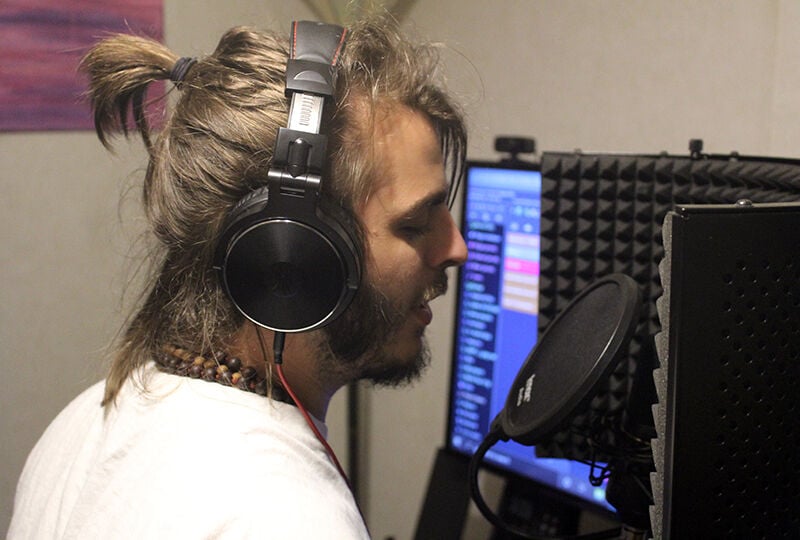 Shott (far right) was a student in the first section of "Critical Approaches to Hip Hop" in 2019. He listens as Professor Justin De Senso (second from left) discusses the origins of the art form.

WYOMISSING, Pa. | For G. Michael Shott, Jr., hip hop has always been a source of inspiration.

When he learned about the Penn State Erickson Discovery Grants, he says he took a chance and submitted a proposal for a research project titled ‘Beats, Rhymes and Life: An Autoethnography.’

Peers say Shott was both surprised and thrilled when he was awarded the grant.

This summer, Shott, a senior communication arts and sciences major with a minor in civic and community engagement, says he has spent time in his home recording studio working on the autoethnography.

Through his research, he says he is conducting a self-analysis, connecting his experiences and memories to larger cultural topics.

An amateur hip hop artist born in Reading, Pa., Shott states, “Hip hop saved my life. It gave me a sense of community, and a feeling of acceptance and belonging.”

Shott states that the main reason he chose Penn State Berks is his love for Reading and Berks County. He had planned to come back after college, but then he realized that he could attend Penn State Berks and stay in the community he loves.

He goes on to explain that growing up without positive role models, he turned to hip hop for spiritual guidance.

“There’s a truth in it that resonates with me and a wisdom that has provided a blueprint for life,” he said.

Shott is also an entrepreneur, according to close friends and family. His business venture, the Reading Hip Hop Collective, is dedicated to artist development and empowerment.

He was a student in the first class, and in an interview in 2019, he stated, “This is one of the most valuable courses in the curriculum; it addresses a topic that is not well respected in academia. Hip hop provides a bridge between art and activism. It’s multinational. Hip hop translates political strife into a language that people can easily understand.”

In addition to being elected Student Government Association president for two terms, Shott is a Penn State Schreyer Honors College Scholar. His thesis is titled, “How Hip Hop Saved My Life.”

“Penn State Berks is so welcoming,” states Shott. “The faculty and staff accepted me, supported my ideas, and allowed me to flourish. I never imagined that I would get support to study hip hop, and it all started with the support I got at Berks, which provided the foundation for everything else I have accomplished.”

Cuomo investigation: What we know and what's next

Cuomo investigation: What we know and what's next

What the Tech? Vaccine card apps