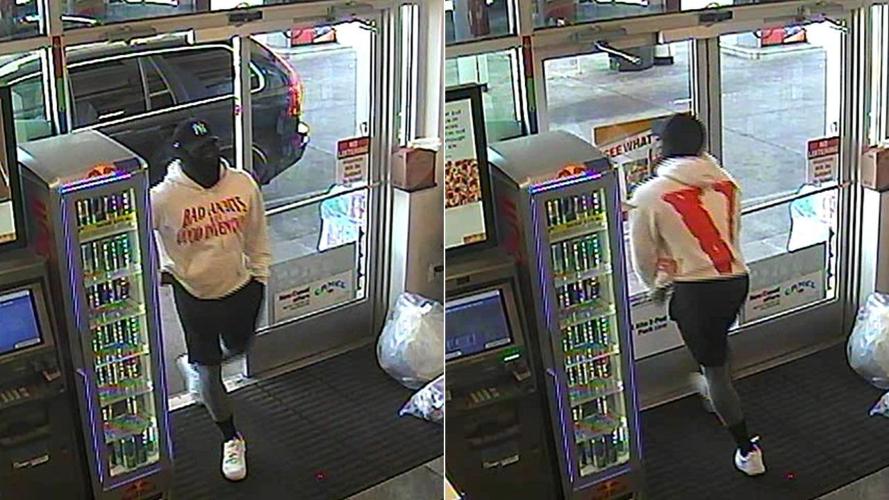 CUMRU TWP., Pa. — Police are on the hunt for the man who, they said, threatened to shoot two employees of a convenience store during an armed robbery in Berks County late Wednesday morning.

The would-be robber approached the counter inside the Sunoco A-Plus at 1547 Lancaster Ave. in Cumru Township shortly before noon as if he were about to make a purchase, according to the police.

Instead, they said he pulled out a handgun and rushed around the counter to the store's office, causing one of the two clerks to fall to the floor.

The bandit looked around the office, threatened to shoot the two employees, and then ran off without taking anything, the police said. He was last seen heading north toward Reading.

Police described the would-be robber as a black man wearing a black baseball hat, a black face mask, a white hooded sweatshirt with the phrase "Bad Habits but Good Intentions" emblazoned in red across the front and a big red "V" on the back, black shorts, gray tights, black socks, and white sneakers.

Anyone who has information about the robbery is urged to contact the Cumru Township Police Department by calling 610-777-9595.

Those who wish to remain anonymous can contact Crime Alert Berks County by calling 877-373-9913 or by texting a tip to 847411, starting the message with keyword alertberks.

Crime Alert is offering a cash reward of up to $10,000 for information that leads to an arrest.

Olivia Newton-John, who played Sandy in 'Grease,' dies at 73

Olivia Newton-John, who played Sandy in 'Grease,' dies at 73

What the Tech? App of the Day: Mathway

What the Tech? iPad vs. laptop

What the Tech? Gadgets to help college students avoid distractions