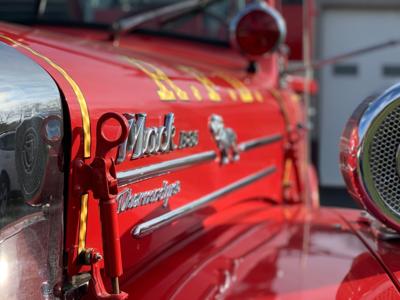 BERN TWP., Pa. - Santa's sleigh has nothing on this.

After decades of service in the Reading Fire Department, the old Keystone Hook and Ladder Company's Ladder 1 is coming back to the city to serve in a different way. The truck will be Santa's ride down Penn Street in the city's annual holiday parade, which is set to step off at 10 a.m. Saturday.

"The holiday parade, the Christmas parade was a part of my life growing up," said former firefighter Bruce Dengler.

The truck and its counterpart, Engine 3, were stationed at North Third and Court streets for 31 years. Today, they're still original, from tread to siren.

"It's a labor of love for all of us," said Dengler.

After 14 years of restoration, the 1959 Mack B65 engine is back on the road. Even after three decades of service with the Reading Fire Department, it's making its debut in the parade.

"It's 60 years old this year," said former firefighter Martin Daniels. "It's great that we got this thing back together."

After decades of service in the Reading Fire Department, the old Keystone Hook and Ladder Company's Ladder 1 is coming back to the city to ser…

The restorations were completed earlier this year. The trucks have already made appearances in various parades and shows in Pennsylvania.

Santa will have to leave his sleigh parked at the North Pole when he comes to Reading. He has one sweet ride waiting for him.

"The whole goal to restore them was to get them back into the community and have everybody enjoy them," said Dengler.

If you're heading to the parade on Saturday, the following garages will offer free parking: