ALLENTOWN, Pa. – Among the topics discussed at its Wednesday night meeting, Allentown City Council is considering asking voters to decide whether English should be removed as the official language of the City of Allentown, as stated in its local constitution.

A paragraph in the Allentown Home Rule Charter provides that "English shall be the official language of the City of Allentown and the language in which City business shall be conducted, unless otherwise required by applicable state and/or federal law or regulation." The proposal is to eliminate that portion of the charter. 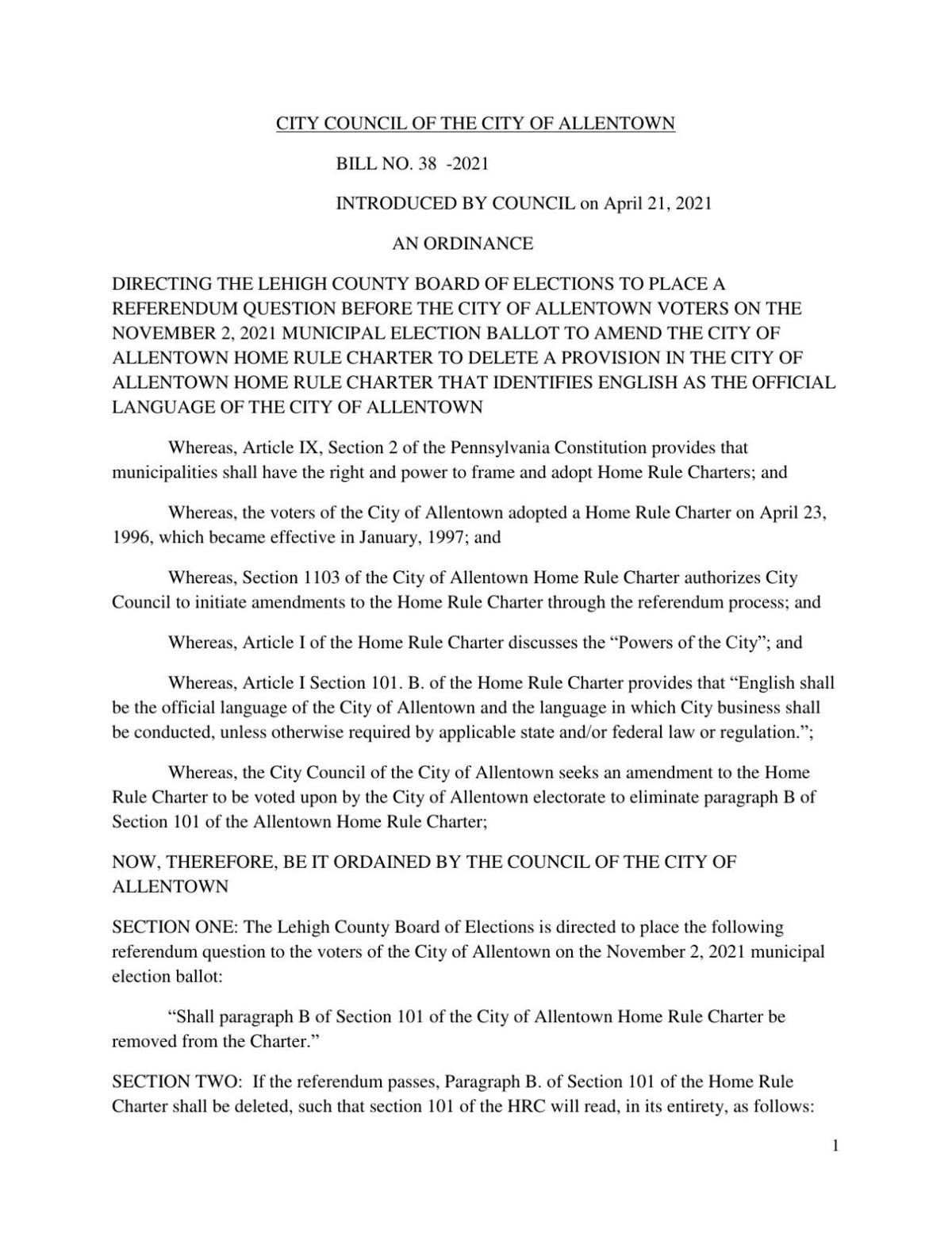 The Rules, Chambers, Intergovernmental Relations and Strategy Committee will review the proposed change. If approved, the Lehigh County Board of Elections would then be directed to place a referendum question before Allentown voters, which would ask, "Shall paragraph B of Section 101 of the City of Allentown Home Rule Charter be removed from the Charter."

The question would appear on the Nov. 2 municipal election ballot.

The bill offers 10 recommendations which the city's Department of Community and Economic Development will be tasked with implementing. Calling "quality, safe and affordable housing a right for each resident," council said the city has a "moral, ethical and legal obligation to ensure our residents live in housing without fear of discrimination on the grounds of race, sexual orientation, gender identity or income status."

Council also approved a bill to amend the city's general offenses code to regulate establishments that offer BYOB options. The new regulations are needed "in order to protect the rights of residents and business owners to the quiet enjoyment of their property, to protect the health, welfare and safety of the residents and guests of the City of Allentown," according to the ordinance.

The PLCB, however, allows municipalities the right to enact ordinances restricting BYOB establishments to maintain quality of life. The local requirements for businesses are multifaceted and include obtaining various licenses, certificates and permits.

One such requirement put forth in the proposed bill for the city of Allentown — the BYOB Establishment Permit — must be obtained and renewed annually at a cost of $250 per year. The application for the permit would be submitted to the Allentown police chief, who would determine whether the establishment complies with the provisions of the bill.

Finally, the administration will examine when the public will be again be permitted to attend council meetings at Allentown City Hall. Council directed the administration to seek the input of Director of Health Vicky Kistler prior to the body's next meeting.

The resolution states that city council and the administration recognize 'that quality, safe and affordable housing is a right for each resident.'