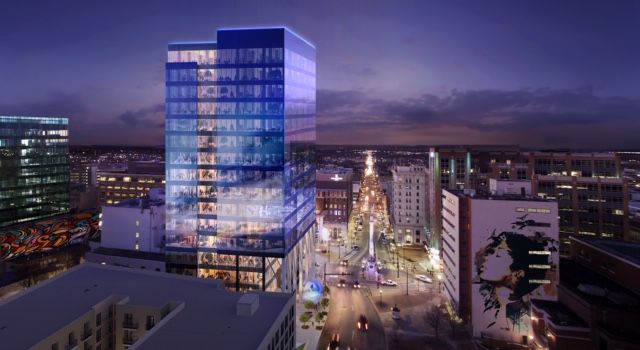 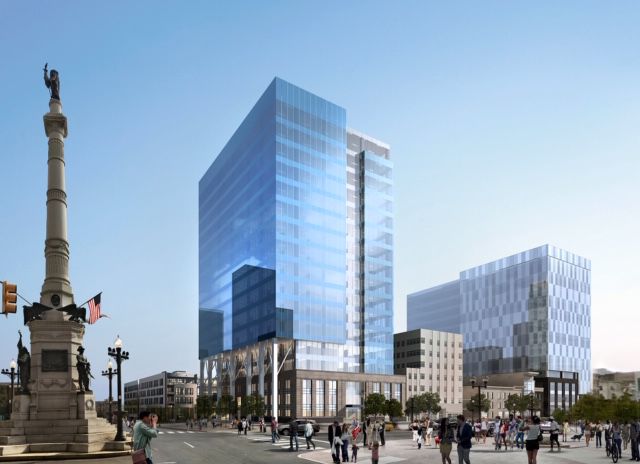 Center City Investment Corp. presented Wednesday to the Allentown Neighborhood Improvement Zone Development Authority (ANIZDA) changes to a high-rise office building that the board approved for funding two years ago. The building is to be located on Allentown's Center Square above the current Wells Fargo Bank at Seventh and Hamilton streets.

Center City President J.B. Reilly said the slight downsizing and updated design modifications to the original plans for the now 11- to 16-story structure, formerly referred to as the 702 Hamilton Tower before being renamed 1 Center Square, will be his sixth downtown office project. It will be located at 702 Hamilton Street and also will be built not only atop but alongside and behind Wells Fargo as well.

He explained the new 296,000 square-foot tower will feature an all solar glass exterior rising from the vintage architectural facade of the former Merchants Bank, now a Wells Fargo Bank, and will allow for plenty of natural light to flood offices. The sides of the building above the bank facade also will "cantilever" over the sidewalks below. The first floor lobby and retail shops will be similar to those at the Five City Center building, he said.

Reilly noted parking for workers will be at one of the nearby Center City or Allentown Parking Authority garages containing 6,000 parking spots.

The multi-downtown project developer claims at present over 95% of his office space downtown is rented.

"If a prospective tenant came to me and asked for 50,000 square-feet of office space, I would have to say we don't have it," Reilly revealed.

He added only one floor of his Five City Center building is vacant. The building has ADP as the anchor tenant and lights up with the highly detectable red linear lights.

Construction on the tower is expected to begin late next year and completion for tenant occupancy will be sometime in 2022.

In other business, the board approved a 2% salary increase for ANIZDA Executive Director Steve Bamford who will earn $147,900 next year and an additional previously agreed to annual bonus of $7,500 for achievement in work performance.

City Center has plans for new 16-story office building in Allentown, inspiration came from city's past

When JB Reilly bought the Merchant bank building in 1999, downtown Allentown was a much different place.

What the Tech? What to do when your phone gets wet

What the Tech? One-stop shop to plan your reservations for summer trips