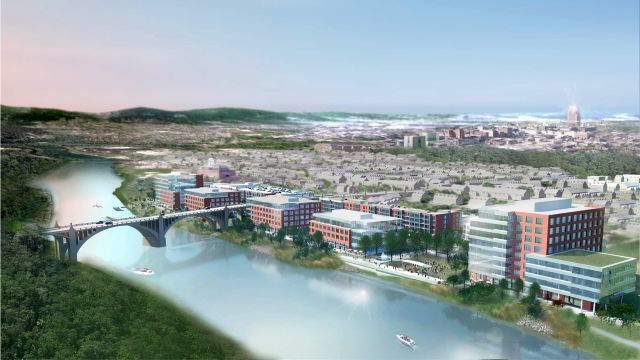 The Waterfront project as viewed from the north. 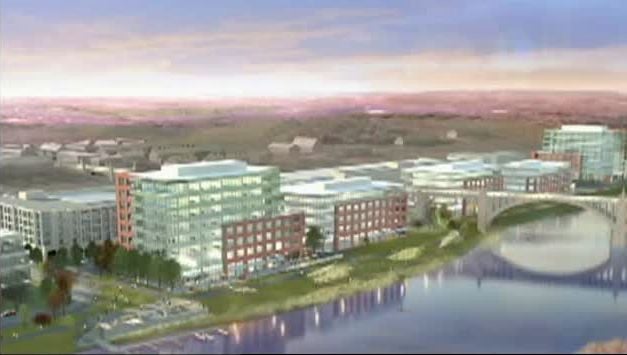 A local development company has unveiled its plan to transform Allentown's waterfront.

The Waterfront project as viewed from the north.

A local development company has unveiled its plan to transform Allentown's waterfront.

ALLENTOWN, Pa. - The rowing shells were a nice touch.

Jaindl Properties & CBRE hosted their "Building the Future" event on The Waterfront Tuesday. Lehigh University's crew team was practicing on the easily-forgotten stretch of the Lehigh River as the sun set. Crew teams usually practice at 5 a.m., not 5 p.m.

“That was all planned,” said Jaindl Properties COO, Zac Jaindl with a laugh. "You're selling the vision of a real work and play environment."

It was that vision of a real work/play "campus," as Jaindl calls it, that they were trying to sell. The play part is easy to see: the bones of the amphitheater and river walk are there. However, the work part is harder. There are curbs, street lights, and building pads, but not much has changed since we last visited the site in June. To be fair, there were some new reclaimed steel trusses surrounding the theater.

"Really, we're in phase 3," Jaindl said. "We have about $19 million into the project between utilities - everything you need to make a city work."

The question now becomes getting the leasing in order. Jaindl & CBRE have been upfront that they will not build until the office space is at 50% leased. Jody King, managing the property for CBRE, says they're almost there. Both King and Jaindl remain confident, as they did back in June, that they can get steel in the ground before the winter.

"So when we build a building, it’s not going to be one apartment building sitting down here by itself, then one office, then another office. It's going to be a garage, an office, and a residential building coming out of the ground at the same time, which gives us critical mass," said Jaindl.

Jaindl pointed out that unlike downtown Allentown, there is currently no infrastructure at the waterfront to support a singular building. In order for the plan to work and be continuously populated, at the jump, there needs to be three buildings going up at once, Jaindl said, so that they play off each other.

Tuesday’s event was about showing people what the waterfront has to offer. "Even though you can tell people there's a river here, they won't believe before they see it," Jaindl said. “The waterfront is really just the start. It’s the up and coming jewel of the river district.”

In order to start setting that gem, they’ve got to get the leasing. King says they have leases signed. They just haven’t hit that 50% mark.

Jaindl remains confident. "I have $19 million into this site. If I didn’t believe it was happening, I wouldn't put another dime into it."

Allentown's Waterfront developer says tenants lined up for phase one

The developer behind an ambitious plan to bring office buildings, retailers, apartments and public space to a stretch of the Lehigh River wate…

John Travolta thanks fans after first Thanksgiving without Kelly Preston

John Travolta thanks fans after first Thanksgiving without Kelly Preston

Mild with clouds giving way to some sunshine.

What the Tech? Work-from-home gift ideas

What the Tech? Best cooking apps