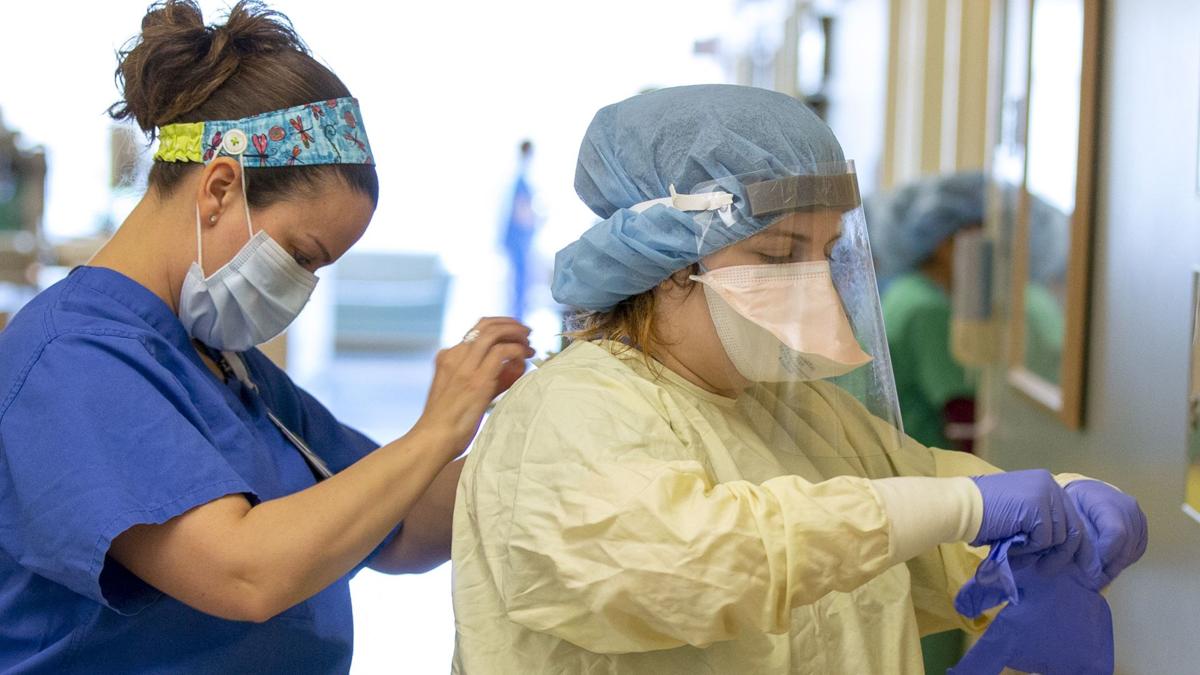 Karen Palladino, a nurse manager with Penn State Health St. Joseph, helps put PPE on Abigail Adelsberger, a clinical nursing associate, before she enters a room with a COVID-19 patient.

Karen Palladino, a nurse manager with Penn State Health St. Joseph, helps put PPE on Abigail Adelsberger, a clinical nursing associate, before she enters a room with a COVID-19 patient.

HARRISBURG, Pa. (The Center Square) — Pennsylvania hospitals are struggling to hire and retain nurses amid the coronavirus pandemic, due in part to travel nurse agencies taking advantage of the situation, hospital administrators testified at a House Majority Policy Committee hearing Thursday.

Numerous lawmakers and health care professionals attended the hearing at the hangar for Penn State Health's Life Lion helicopter in Hershey to discuss the nursing shortage, the reasons behind it, and how it's playing out in hospitals struggling during the pandemic.

"It is a wicked, perpetual cycle," she said.

"So the thought that I can do the exact same job that I do, that I can go anywhere in the country that I want and I can make double the amount of money, that's probably an attractive offer," she said.

There are currently more than 400 vacancies in the Penn State system, where the rate of turnover is at 14% overall, and even higher for nurses, according to the news station.

"We have patients waiting hours and sometimes days for beds in inpatient settings," she said.

The hearing Thursday came about two weeks after the Pennsylvania Higher Education Assistance Agency announced a new Student Loan Relief for Nurses program that will use $5 million of the state’s share of federal American Rescue Plan Act funds to forgive up to $7,500 in student loans.

The program rewards selected applicants with up to $2,500 per year for up to three years on the job, beginning in 2020. Eligible applicants must be licensed through the Department of State, be a Pennsylvania resident, and have begun employment before Dec. 31. Applicants must have worked 20 or more hours per week on average for a year to qualify.

"My administration is thrilled to help facilitate this initiative, which will not only give a well-deserved boost to nurses on the front lines of this pandemic, but also help rebuild a strong workforce of future healthcare workers," Gov. Tom Wolf said when he announced the program.

The PHEAA is accepting applications through its website between Jan. 1 and March 1, 2022.

In Hershey, state Rep. Tom Mehaffie, R-Dauphin, spoke about other efforts in the works to address the nursing shortage.

Mehaffie co-sponsored House Bill 106 with Rep. KC Tomlinson, R-Bucks, to set safe patient limits under the care of a single nurse in an effort to minimize burnout in the profession.

"If something like this was implemented years ago, we may not be in this situation," he said. "Without nurses, we don't have hospitals. This is a huge issue statewide, and I think it's national."

HB 106 has remained in the House Health Committee since it was introduced in February.

This article originally ran on thecentersquare.com.