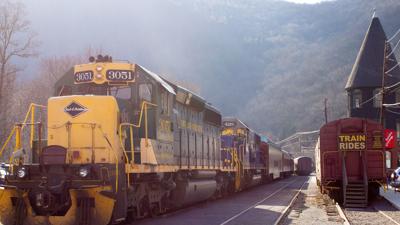 Vintage coaches follow the Lehigh River, travel past Glen Onoko, to Lehigh Gorge State Park. The train ride is a popular tourist attraction. But a recent borough audit found the rail line hasn't been paying an amusement tax. This led to a legal argument, where the consequences could be anything but amusing.

The Lehigh Gorge Scenic Railway is a 45-minute ride through Jim Thorpe and the Pocono Mountains. It's a big draw for tourists like Alston Boyd and Kate O'Neal.

"It was beautiful, excellent..our first time on," O'Neal laughed.

However, a battle over taxes threatens to derail the good times.

"It's the law that they pay this amusement tax. We certainly don't want them to leave."

Borough Council President Greg Strubinger said the rail line, which is part of the Reading Northern Railway, owes around $90,000 in an amusement tax, a tax 10 other businesses pay.

The issue went to court. A judge ruled with the borough, but the railway is appealing.

Strubinger says it's an issue of fairness, and the railway said it will depart for good rather than pay.

"There is no question it would have a great impact," said Michael Rivkin, President of the Jim Thorpe Tourism Agency. He is fearful of the economic effects of a pullout.

"There are jobs, people pay to park here. People go into our shops and spend money. So the impact is huge," Rivkin said.

An impact affecting riders like Rebecca Mast and Bethany Brant.

"This is like our little fall tradition, just to come up here and see the leaves," they said.

The borough says it doesn't know why the company won't pay. They do say the railway said it will prevent any other company from taking over, as they own part of the rail line.

We did reach out to the company for comment both by phone and email, and did not hear back.

The company said Wednesday it is closing in late November following a dispute over taxes with the Jim Thorpe Borough Council.

Low clouds giving way to some sunshine with a much warmer and more humid afternoon.

Low clouds giving way to some sunshine with another warm and more humid afternoon.