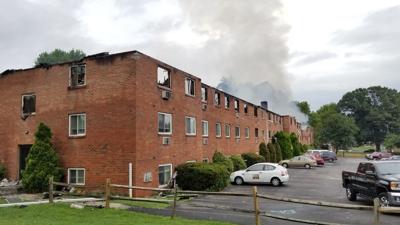 WFMZ's Ali Reid on Friday spoke with residents who returned Friday to see the aftermath of the fire.

The Norco Fire Company and North Coventry Township Police Department responded to Ashwood Apartments in the 700 block of Worth Boulevard about 7:20 p.m. Thursday. Police and firefighters evacuated the building as fire spread throughout the complex. Emergency crews deemed the blaze under control after several hours, but the fire re-ignited in a portion of the complex Friday morning.

Police said 30 fire departments and EMS crews from Chester, Berks, Montgomery and Delaware counties assisted Norco Fire Company. About 100 residents were displaced and were transported from the Owen J. Roberts School District to the Norco Fire Company, where they were assisted by the American Red Cross.

Fire marshals from Chester County, the Pennsylvania State Police and the ATF are assisting in the fire investigation, according to township police.

Smoke could be seen from miles away.

Considerable cloudiness with a shower or two, evolving into a steadier rain in the afternoon.

Cloudy with rain, tapering off and ending; becoming blustery in the afternoon.

What the Tech? Robots for the home

What the Tech? Gift ideas: Chess set, the Mirror

What the Tech? Gadget gifts: Projectors