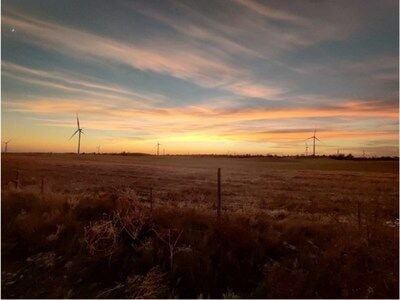 Silvia Ortin, COO Onshore Wind and Solar PV Americas, RWE Renewables: "Under very challenging conditions, our teams have delivered this project with outstanding dedication to our business goals while continuing to prioritize health and safety. This milestone, of our 26th onshore wind farm in the U.S., further proves our track record in the development, construction and operation of high-quality generation assets in North America—one of our focus markets."

The RWE Renewables portfolio in North America continues to expand as Boiling Springs, a 148-megawatt (MW) project, located in Woodward County, Okla., has achieved commercial operation. The facility is RWE's first project in Oklahoma and in the Southwest Power Pool.

It is powered by 60 GE turbines, a mix of GE127-2.82 MW and GE 116-2.3 MW generators. Boiling Springs came online in late December after posting an impressive work safety record of no lost time incidents.

"After several years of development, we are thrilled to see this project fully operational in the Southwest Power Pool (SPP), a new market for us," said Silvia Ortin, Chief Operating Officer North America. "SPP is a highly-attractive market with considerable potential for working with new customers in the corporate, industrial and utility segments. As always, we appreciate the local support from the community and our landowners to help us bring Boiling Springs from development through construction and now to successful operation."

RWE announced, in September 2019, Boiling Springs signed an agreement with American Honda Motor Co., Inc., for offtake as part of one of the largest-ever renewable energy purchases by the automotive industry. Under the terms of the Virtual Power Purchase Agreement (VPPA), Honda has contracted for 120 MW of the power and renewable attributes from the 148 MW Boiling Springs Wind Farm.

North America is one of the focus markets of RWE, with a strong development pipeline in the renewables business. The installed capacity in the U.S. accounts for more than one third of the Group´s renewables capacity. As one of the largest renewables players worldwide RWE plans a net global investment of €5 billion from 2020 through 2022. Project partnerships have the potential to increase this expenditure considerably to € 8 – 9 billion.

RWE constructs, owns and operates some of the highest performing wind, solar and energy storage projects in the U.S. As an established leader in renewables, RWE has recently entered into a joint venture, New England Aqua Ventus, focused on floating offshore wind in the state of Maine.

For more information, go to americas.rwe.com.

RWE Renewables
RWE Renewables, a subsidiary of the RWE Group, is one of the world's leading renewable energy companies. With around 3,500 employees, the company has onshore and offshore wind farms, photovoltaic plants and battery storage facilities with a combined capacity of approximately 9 gigawatts. RWE Renewables is driving the expansion of renewable energy in more than 15 countries on four continents. By the end of 2022, RWE Renewables targets to invest €5 billion net in renewable energy and to grow its renewables portfolio to 13 gigawatts of net capacity. Beyond this, the company plans to further grow in wind and solar power. The focus is on the Americas, the core markets in Europe and the Asia-Pacific region.