"In the top tier of Mexican pop royalty… Los Bukis are the undisputed kings of Spanish-language romantic groups… with a unique sound that includes electrified compositions ranging anywhere from cumbia to bolero and huapangos. …the group's leader, Marco Antonio Solis, is one of Mexico's premier songwriters and producers... responsible for Los Bukis' glorious, catchy [and] elaborate sound" – Los Angeles Times

LOS BUKIS Will Return To The Stage For The First Time in 25 Years, With Their August 27th Kickoff Appearance In Los Angeles' New SoFi Stadium

LOS ANGELES, June 14, 2021 /PRNewswire-HISPANIC PR WIRE/ -- In what is unquestionably the biggest news of the year for fans of Regional Mexican Music, the legendary group Los Bukis, one of the most important names in the history of Latin music, is now reuniting 25 years after their last concert together and announcing their very special "UNA HISTORIA CANTADA" limited engagement concert series. 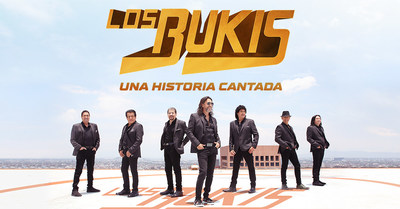 Founded in 1976 and dissolved in 1996, Los Bukis recorded 16 studio albums that quickly won the public's heart and produced numerous chart-topping and multiplatinum songs that are among the most revered by fans across the Latin Music spectrum. Now those fans will have the first opportunity in 25 years to hear many of these iconic songs played live once again.

"Los Bukis emerged in the 1970s as a new force in the grupo genre with a cornucopia of hits.  By the '80s, they completely dominated Mexico's pop-music scene."