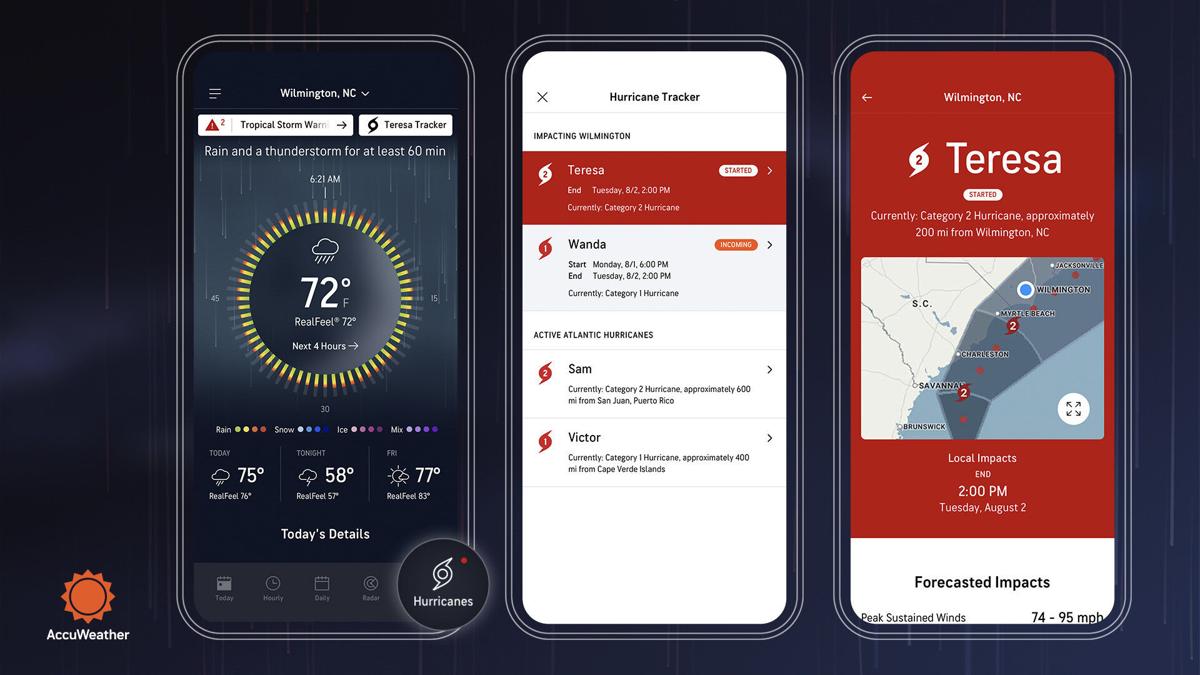 STATE COLLEGE, Pa., July 22, 2021 /PRNewswire/ -- AccuWeather today announced its latest innovation bringing safety to the forefront during hurricanes and tropical storms with the new AccuWeather Hurricane Tracker, available in the AccuWeather App for both iOS and Android and on accuweather.com. This new feature is easily accessible from multiple entry points throughout the app, ensuring users have access to critical information designed to immediately heighten awareness of hurricanes and tropical storms as they develop and make landfall.

The tracker product puts safety and preparation first, and reviews are already in with users calling the new feature "excellent," "easy to understand," and "an outstanding service provided."

At the moment a tropical storm or hurricane has begun its journey in the Atlantic basin, the AccuWeather app will surface a fifth button, identified by a hurricane symbol, at the bottom, right-hand side of the home screen, seamlessly navigating a user through to a page for access to storm details by selecting a respective storm name. Additional, localized features will be integrated throughout hurricane season as well, such as a red dot, illuminated next to the fifth button indicating that a users' exact location could be impacted.

As with much of the AccuWeather App's intuitive design, the AccuWeather Forecast Eye Path® shows a rich visualization of the progress of a storm, bringing a user along the interactive eye path up the coast, heading inland or going out to sea.

Start and end times will also appear below the AccuWeather Forecast Eye Path map where users can scroll down to find vital descriptive forecasted impact details for the location such as peak winds, total rainfall, rainfall amount probability graphs, hourly wind and rainfall charts and impact maps. If the location in view will not be threatened by a hurricane, a list of impacted cities will be made available to raise awareness of what locations are at risk.

"We are expecting a more active than normal hurricane season in 2021, and the AccuWeather Hurricane Tracker will give our users who want to be 'in the know' a significant advantage when preparing for and staying apprised of a storm's track, whether that storm has already made an impact or is nearing landfall," said AccuWeather's lead hurricane forecaster Dan Kottlowski. "Awareness and readiness are key during these severe weather events, and we designed this tool  to empower people to make the best weather-related decisions as possible."

"Our DNA of building products with proven Superior Accuracy is how we have approached developing the Hurricane Tracker," Said AccuWeather Chief Product Officer Kurt Fulepp. "Following the unusually active and highly destructive 2020 hurricane season, we sought to develop the most comprehensive and intuitive hurricane tracker on the market by focusing on the most hyperlocal, most detailed and most accurate information, with a highly accessible, user-friendly and sophisticated design. This addition to our app reflects AccuWeather's commitment to providing the best information for the public's well-being, communicated effectively and clearly so they can take action, when necessary, at the right time for optimal safety."

With the 2021 hurricane season already underway, most recently with Tropical Storm Elsa, AccuWeather forecasters expect another active year, urging residents in hurricane-prone areas to take precautions now.  AccuWeather is forecasting that the 2021 Atlantic hurricane season will result in 16-20 named storms, including seven to 10 hurricanes. Of those expected to reach hurricane strength, three to five are predicted to become major hurricanes (Category 3 or higher with maximum sustained winds of 111mph or greater).

In January 2019, AccuWeather began using its proprietary RealImpact™ Scale for Hurricanes; an unprecedented 6-point scale that considers various factors designed to evaluate the threat posed by a hurricane or tropical storm. Differing from the widely used Saffir-Simpson Scale, which only measures wind speed, the AccuWeather RealImpact Scale for Hurricanes considers threats such as coastal storm surge and flooding, rainfall which on average are the primary cause of death and destruction during these severe storms. Ratings range between 1-5, from least severe to most severe, but also includes a measurement of "Less than 1" if a storm system does not rise to the level of a Category 1 on the Saffir-Simpson Scale, but may still pose a considerable threat or cause significant damage.

About AccuWeather, Inc. and accuweather.com — AccuWeather, recognized and documented as the most accurate source of weather forecasts and warnings in the world, has saved tens of thousands of lives, prevented hundreds of thousands of injuries and tens of billions of dollars in property damage. With global headquarters in State College, PA and other offices around the world, AccuWeather serves more than 1.5 billion people daily to help them plan their lives and get more out of their day through digital media properties, such as accuweather.com and mobile, as well as radio, television, newspapers, and the 24/7 AccuWeather Network channel. Additionally, AccuWeather produces and distributes news, weather content, and video for more than 180,000 third-party websites. Among AccuWeather's many innovative and award-winning features available free to the public are MinuteCast® Minute by Minute™ forecasts with Superior Accuracy™. Furthermore, AccuWeather serves more than half of Fortune 500 companies and thousands of businesses globally. Dr. Joel N. Myers, Founder and Chief Executive Officer, established AccuWeather in 1962 and is considered the "father of modern commercial meteorology." Dr. Myers, a leading creative thinker and visionary, has been named "the most accurate man in weather" by The New York Times and one of the top entrepreneurs in American history by Entrepreneur's Encyclopedia of Entrepreneurs.

The AccuWeather app for Android phone and tablet users is free at the Google Play store. The