HARRISBURG, Pa. - The Pennsylvania Interscholastic Athletic Association is pausing mandatory fall sports activities for two weeks, until August 24, as it further evaluates the state's recommendation that Pre-K–12 school and recreational youth sports be delayed until at least January 1.

The organization made the announcement after a meeting Friday afternoon. The PIAA said it is asking Governor Tom Wolf, along with the Departments of Health and Education, to further discuss fall sports. The organization will also discuss the issue with the Pennsylvania General Assembly.

Voluntary workouts can continue during the 2-week period, the PIAA said in a news release Friday. The Board will reconvene August 21.

"It is clear to PIAA, the unintended consequences of cancelling fall sports need to be further reviewed," the PIAA said.

Thousands of student-athletes, parents, and community leaders have contacted the PIAA about the issue, according to the release.

The organization said it believes the state's recommendation would have a potential negative impact on the students' physical, social, emotional and mental health. Some students are also financially unable to participate in any other form of non-school-based athletic programs, the organization said.

The PIAA said it still believes it can safely sponsor fall sports. "The PIAA remains committed to providing a season for each of the sports during the 2020-2021 school year," the PIAA said in the release.

Pennsylvania House Majority Leader Kerry Benninghoff, in a letter to the PIAA, had urged it to continue going forward with fall sports as scheduled, rather than following the state's recommendation. 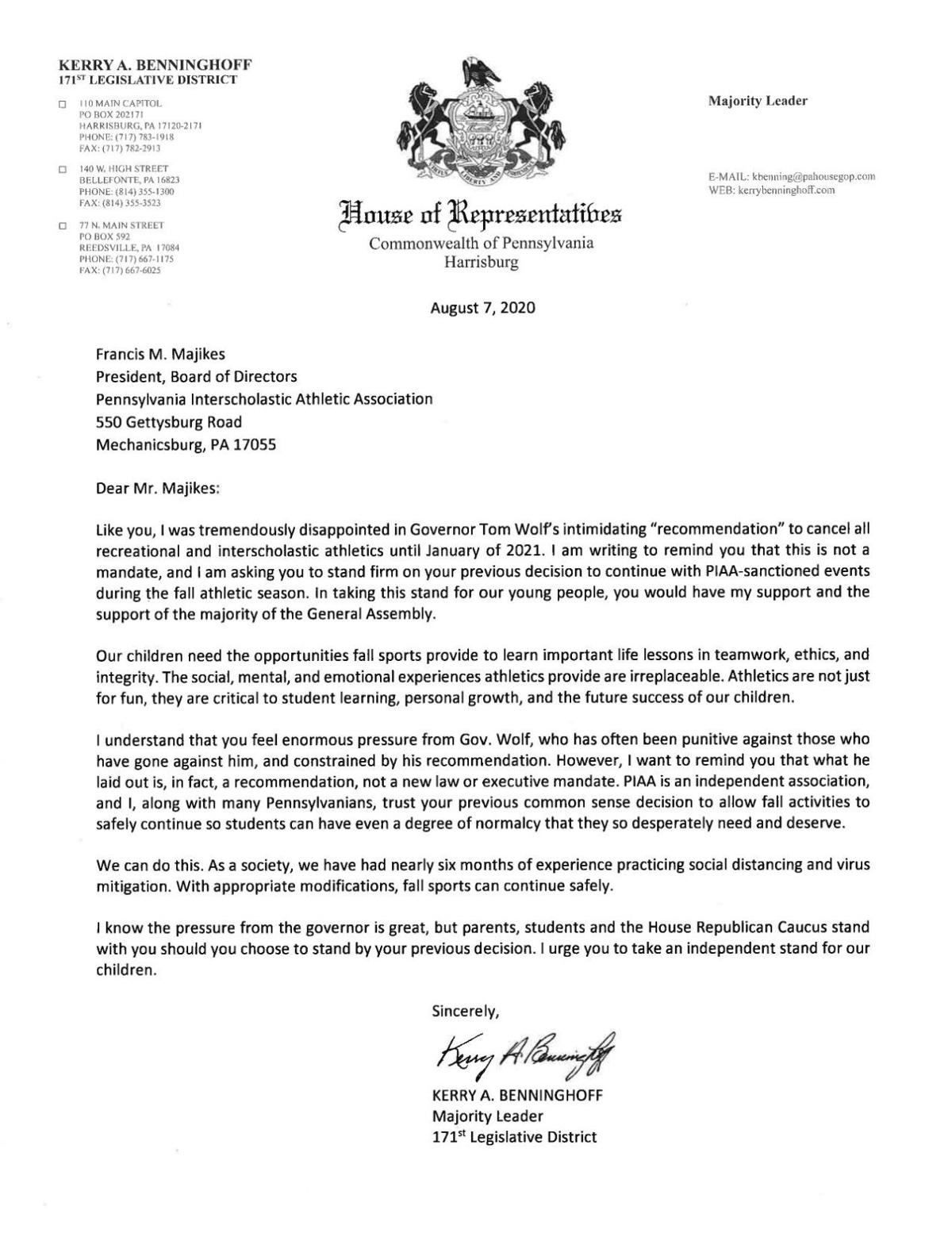 “Like you, I was tremendously disappointed in Gov. Wolf’s intimidating ‘recommendation’ to cancel all recreational and interscholastic athletics until January of 2021. I am writing to remind you that this is not a mandate, and I am asking you to stand firm on your previous decision to continue with PIAA-sanctioned events during the fall athletic season. In taking this stand for our young people, you would have my support and the support of the majority of the General Assembly,” Benninghoff wrote in part.

The state's recommendation applies to team and individual, school and non-school recreational youth sports, and includes competitions, intramural play and scrimmages. The recommendation says people should continue conditioning, drills and other training activities on an individual basis.

The state's recommendation does not apply to collegiate and professional sports.

The state called the guidance a strong recommendation, not an order or mandate.

Reed takes the lead as the real US Open gets started

Clear and quite chilly.

Comfortably cool with plenty of sunshine.