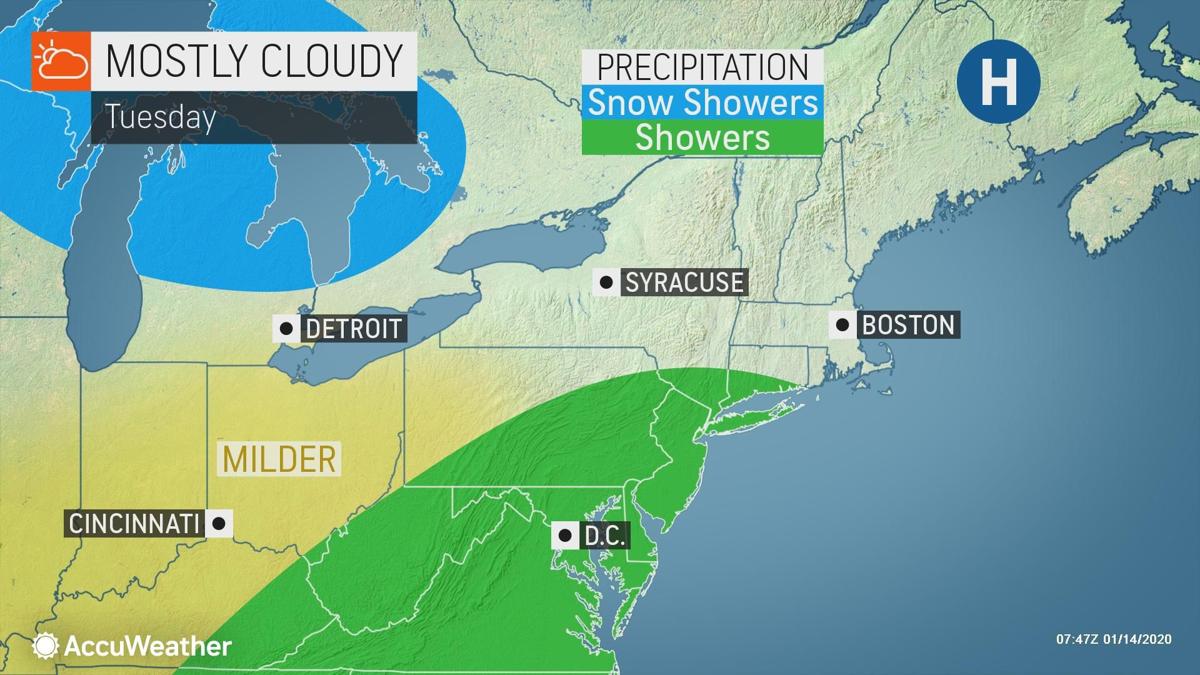 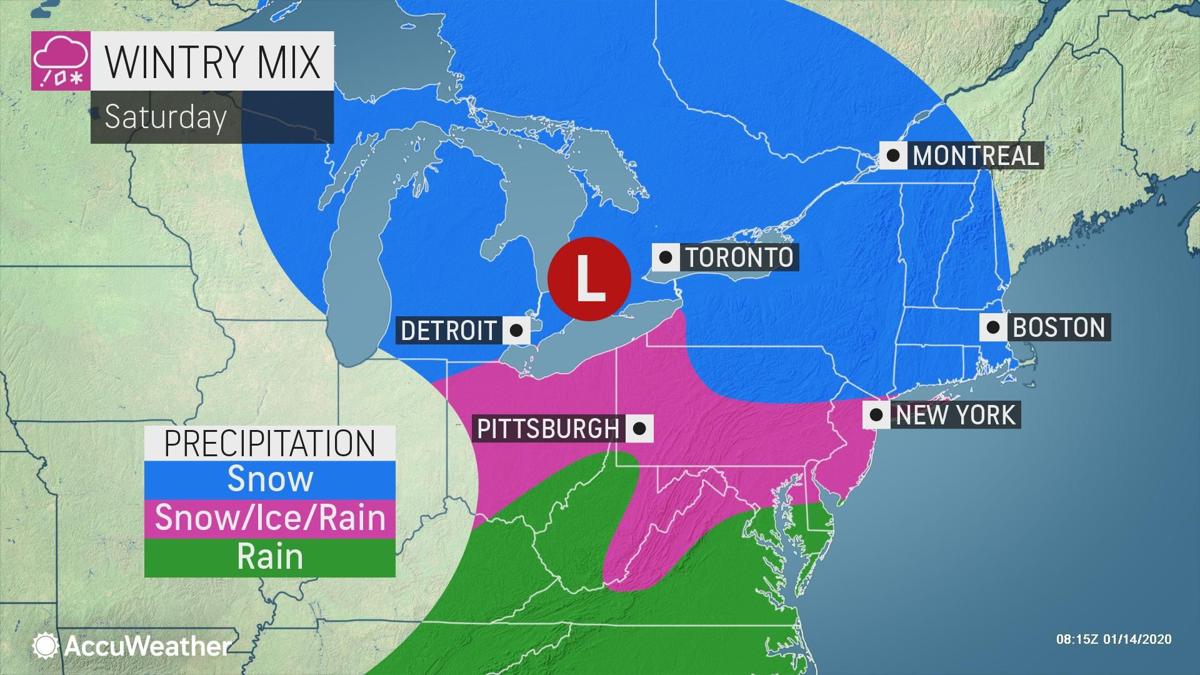 TODAY: Mostly cloudy with a shower or two around, and spotty drizzle, mainly in the afternoon. High: 46

TONIGHT: A spotty shower or touch of drizzle early, then clouds breaking. Low: 38

WEDNESDAY: Mild with a mix of clouds and sunshine; a shower at night. High: 53 Low: 39

Welcome to a transitional week of weather! From record warmth this past weekend to a winter storm this upcoming weekend, with a temperature roller-coaster tucked in between, it's bound to be an interesting run that serves both warm weather fans and snow-lovers alike! Highs camp out between 45 to 55 degrees through the middle of the week all before an arctic air mass brings back a bitter chill by Friday.

This sets the stage for a winter storm this weekend. While details and specifics will have to be worked out as the week progresses, a widespread accumulating snow is likely for much of the area to start the weekend Saturday with lake enhanced flurries or snow showers on Sunday. For suffering snow fans, it’s better late than never. And for those that aren’t fans of the cold and snow, you’ve had a good stretch, and it isn’t quite over just yet.

Our Monday was dominated by plenty of clouds, and clouds will remain a fixture in our skies Tuesday as well. As weak low pressure ripples along a front that’s stalled to our south Tuesday, a few showers and some patchy drizzle are possible, especially in the afternoon and evening. Any rain will be light and scattered, with only a few hundredths of an inch expected. Given the abundant clouds, highs on Tuesday will be similar to where we were on Monday, around 45 to 50 degrees for most of the area, not bad for mid-January with the lack of sunshine.

This will be the pick day of the forecast in terms of warmth and sunshine, as a weak area of high pressure builds in and delivers a partly sunny, mild, and dry day. Highs will bounce back into the low to mid 50s, likely the last 50-something-degree day we’ll see for quite a bit. But as many of us have seen upwards of 10 days with highs above 50 degrees so far this winter, there’s little room for complaint.

A cold front will sweep through the area and off the East Coast late Wednesday night and early Thursday morning. Out ahead of it, there’s nothing more than a shower or two. While a snow shower may linger behind it as well in the higher elevations, the more significant impact this front will have for everyone is to deliver our return to reality starting Thursday afternoon. So while highs on Thursday reach the mid 40s, it’s likely early in the day as temperatures begin to slowly fall in the afternoon as blustery west to northwest winds gust as high as 40 miles-per-hour and deliver some arctic air that will really make its presence felt by Thursday night and Friday.

Arctic high pressure over eastern Canada will give us plenty of sunshine and plenty of cold to wrap up the week, with highs on Friday only around 30 degrees despite lots of sun. A still brisk northwest breeze will keep wind chills colder and well below freezing throughout the day, but it won’t be as windy as Thursday was. Remember this cold air that’s in place come the weekend, as it’s one big ingredient for our potential winter storm.

All eyes are on Saturday for what could be the first winter storm of 2020, and for the entire winter for many. A moderate snow is looking increasingly likely across much of the area north and west of Interstate 95, with the typical winter storm stereotypes in place. The farther north you travel and higher up in elevation you go, the more snow you will see. The farther south and east you travel and closer to the coast you get, the changeover to rain occurs sooner and limits snow totals.

Right now, it looks like a thump of snow will develop sometime early Saturday and that thump will bring most of the accumulating snow on Saturday, before mixing with and changing to rain before ending early Saturday night, at least a changeover south and east of the Lehigh Valley. From the Lehigh Valley and especially north across the Poconos and northwestern New Jersey, a change to rain may never occur, hence the higher snow totals. It’s too early to talk specific amounts or timing, but a 2-4” or 4-8” snowfall look to be the options across most of eastern Pennsylvania and northern New Jersey.

Stay tuned as to where those bands will set up, as a forecast snow map will be out by Thursday as the specifics come into focus. Cold, windy, and drier weather follows our storm for Sunday.