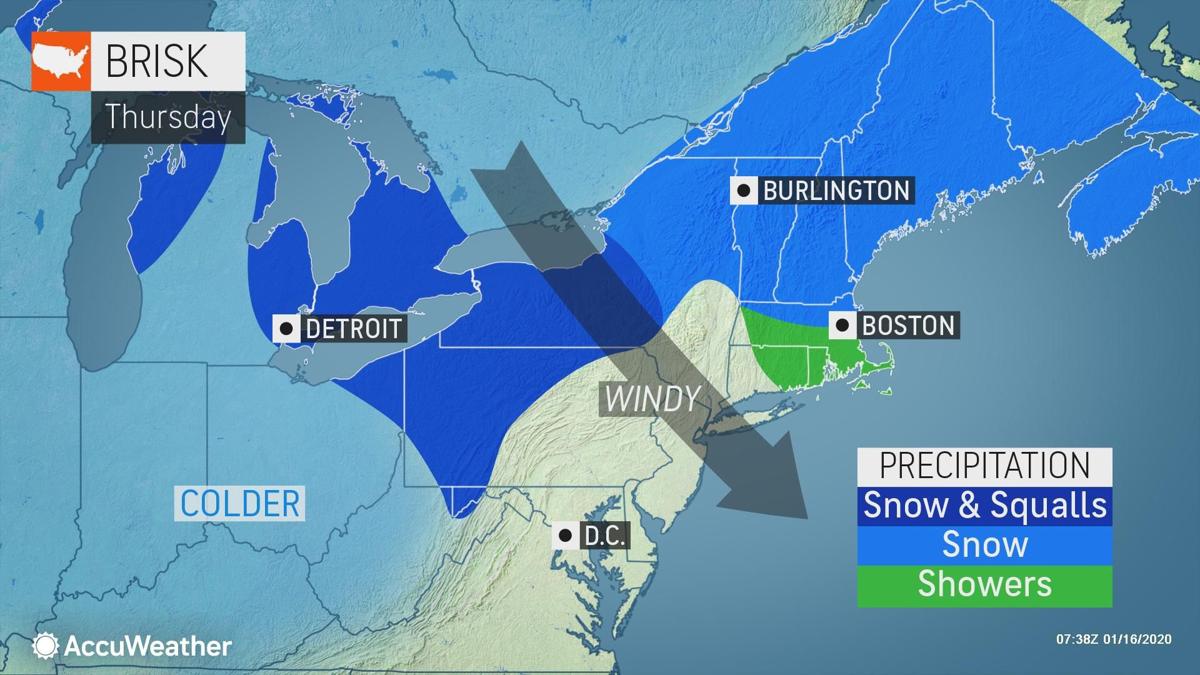 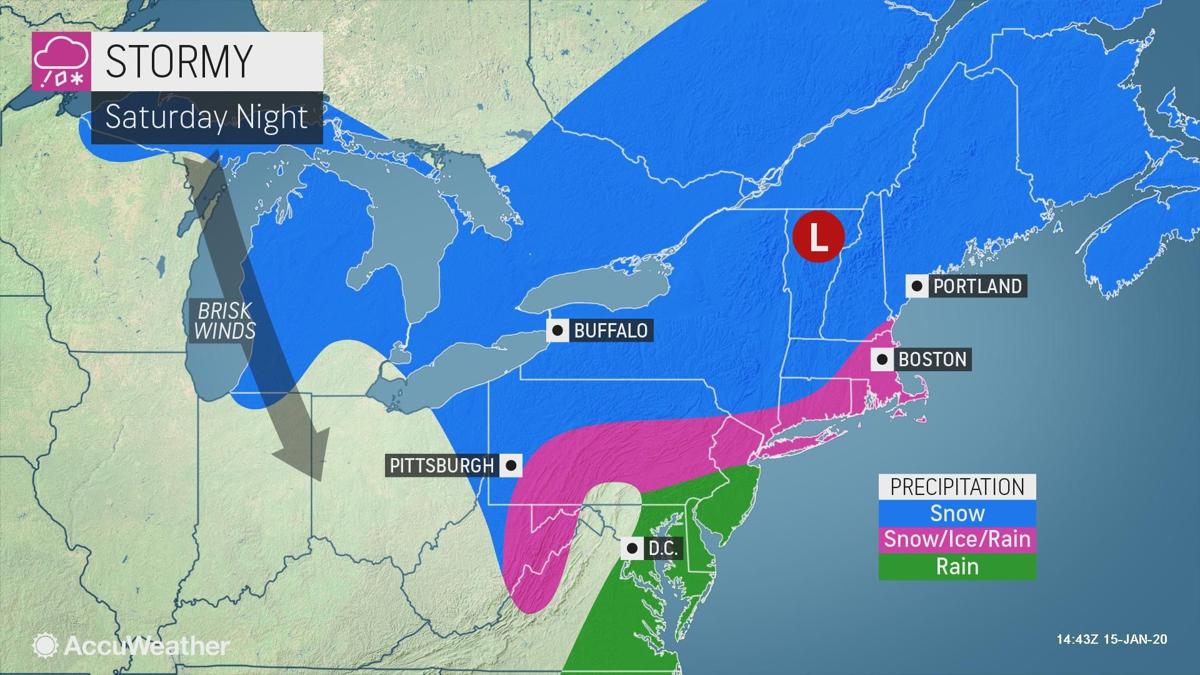 TODAY: Cloudy to partly sunny, windy and chillier with a rain or snow shower. High: 51

TONIGHT: An evening flurry or snow shower; otherwise, windy and turning much colder with clearing. Low: 20

FRIDAY: Brisk early and quite cold despite plenty of sunshine. High: 30 Low: 16

After the week started on a rather cloudy note with a little rain Tuesday, skies turned much sunnier Wednesday which also helped bring high temperatures back to very mild levels in the low 50s. Typical highs this time of the year should be in the mid to upper 30s, and we’ve only seen two 30-something-degree highs for the winter so far. This count looks likely to rise however in the coming days as there’s finally a long-lived cold snap in our future, one that will arrive later today into Friday and stick around through most of next week. This cold snap will also set the stage for a winter storm Saturday, one that looks to bring accumulating snow to a good portion of the area before mixing with and changing over to rain, with perhaps a little ice thrown in there as well. As of now, if you have travel plans on Saturday, you’ll want to plan on things turning slick in the afternoon and evening.

A cold front moved through late last night bringing scattered showers to the area (even an early snow shower across the Poconos) with rainfall totals area-wide checking in less than 0.10" (and no snow accumulation in the Poconos). Overnight lows occurred early in the mid to upper 30s before the clouds set in. Once the clouds and moisture worked in, we saw temperatures slowly rise, reaching the mid 40s by sunrise today. The aforementioned cold front is working out to sea this morning, taking those scattered showers from last night with it.

The chance for a rain/snow shower or heavier squall however will be possible throughout the day, especially during the afternoon and early evening. Cloudy to partly sunny skies can be expected otherwise as the more significant impact from the aforementioned cold front will be the delivery of a reality check with our temperatures. While highs today will be right around or just above 50 degrees, this will likely be first thing this morning as temperatures begin to slowly fall by the afternoon.

A wind advisory is also in effect for the entire are from this morning through this evening as blustery northwest winds gust as high as 45 miles-per-hour. These gusty winds will deliver some arctic air that will really make its presence felt later tonight and Friday.

Some hangover flurries or snow showers from the daytime today will remain possible this evening. By midnight tonight, any precipitation should be done with as clouds gradually decrease. Northwest winds will remain gusty up to 35 miles-per-hour, continuing to drive in an arctic air mass. Overnight lows should drop to around 20 degrees, but with the wind factored in, it will feel more like it's in the lower teens and single digits.

Arctic high pressure over eastern Canada will give us plenty of sunshine and plenty of cold to wrap up the week, with highs on Friday only around 30 degrees despite lots of sun. Northwest breezes won’t be as gusty as they were Thursday, with the strongest gusts likely occurring in the morning before gradually diminishing during the afternoon. Even with the lighter winds however on Friday, wind chills will still be well below freezing throughout the entire day. The cold that returns for the end of the week will set the stage for our impending winter storm on Saturday.

All eyes are on Saturday for what could be the first accumulating snow of 2020. A light (for most) to moderate (higher elevations) snow continues to look likely across much of the area north and west of Interstate 95, with the typical winter storm stereotypes in place. The farther north you travel and higher up in elevation you go, the more snow you will see, like the Poconos and northwestern New Jersey. The farther south and east you travel and closer to the coast you get, the changeover to rain occurs sooner and limits snow totals.

Right now, it looks like a period of snow will develop from midday to early afternoon on Saturday from west to east across the area. As a result, this shield of snow will be fighting the midday and afternoon sun angle, which is why snow accumulates less readily during the middle of the day than at night. Plus, the air will also be very dry initially so the snow will have to put up a fight just to reach the ground at the onset, which could also hinder accumulations.

Despite these obstacles, some accumulating snow is likely for most, with a C-2” more likely towards the Interstate 95 corridor, 2-4” towards the Interstate 78 corridor, and then more than 4” along the Interstate 80 corridor through the higher elevations. Most of the snow looks to fall Saturday afternoon, with a change to a little sleet, and then rain, late in the day and through the overnight, especially from the Lehigh Valley south and east. Of course, timing and amount ideas can always change if the storm track or strength changes, so stay tuned as the remainder of the week progresses. Cold, windy, and drier weather follows our storm for Sunday.

START OF NEXT WEEK

The beginning of the new week should have relatively quiet weather with mostly dry conditions and a mix of sun and clouds outside of the occasional flurry or snow shower, certainly in areas north and west of the Lehigh Valley. The bigger story for the start of the new week will be the cold that lingers from the weekend. Highs may very well not even make it to 30 degrees, and to go along with that, brisk northwest winds will make it feel like it’s down into the teens.